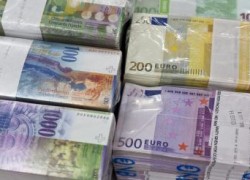 The bailout “troika” said in Lisbon Wednesday it was “very satisfied” with its second quarterly review of Portugal’s performance under the 78 billion-euro financial rescue program agreed last May with Brussels and the IMF, Lusa news reported.

“We’re very satisfied with this second review, in particular with the government’s commitment in implementing the program” and with the main opposition Socialist Party’s “agreement” with the “principal points” inthe plan, Jurgen Kroger, of the European Commission, said at a news conference.

Kroger underlined that “adjustments” could be considered in future for the three-year program, but that it was “not the time to think of a larger financial package.” He said the next quarterly assessment would center on structural reforms.

Rasmus Ruffer, of the European Central Bank, said that, on the financial front, Lisbon had made good progress, especially regarding Bank of Portugal.

Portuguese Finance Minister, Vitor Gaspar, speaking at a news conference Wednesday, said the officials from the European Commission, the European Central Banks and the IMF, confirmed the government had met all its targets for September in terms of cutting deficit and debt and making payments abroad. He also acknowledged the administration was still behind in its domestic payments.

Once approved by Brussels and the IMF, a positive troika assessment will open the way for a fresh loan of 8 billion-euro between December and January, Gaspar said.