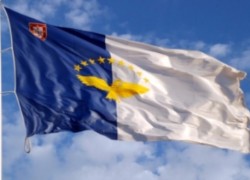 The Portuguese American community of Azorean descent, resident in the Greater Boston area, will celebrate the Azorean Pride Day with a cultural event, on May 22, at 2pm, at the headquarters of Filarmónica de Santo Antonio, 575 Cambridge, Cambridge, MA.

Casa dos Açores da Nova Inglaterra will organize a book sale for the event.  Azorean food will be featured. The event is free and open to the public.

The Azorean Pride Day celebration is part of the 6th Boston Portuguese Festival  underway,  consisting of a series of cultural events taking place in the Greater Boston area from May 9 to June 17.

The festivities  start today, May 5, with a Portuguese music recital by Tenor Zachary Wilder held at 7 pm, at the Emmanuel Church, 15 Newbury St., in Boston.