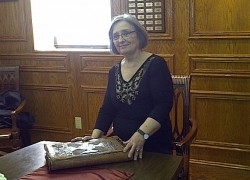 Portuguese author Alice Vieira is visiting schools in Boston (MA), Providence (RI) and Newark (NJ), sponsored by Lisbon based Instituto Camões and the Embassy of Portugal in Washington, DC.

The objective of the visit is to meet teachers of Portuguese and to promote the interest for reading among Portuguese school children.

On April 10, Alice Vieira will close her program with a meeting at 15:30pm, at Casa dos Açores da Nova Inglaterra, at 160 Orchard Street East Providence (RI), where she will meet with teachers, students and parents.