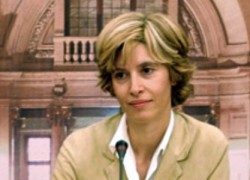 Social Democrat (PSD) Assunção Esteves, 54, was elected, Tuesday, President of the Portuguese Parliament, the first time a woman was voted for the position in Portugal, second-in-line in the Portuguese political hierarchy. She replaces Socialist Party (PS) Jaime Gama.

A graduate of the University of Lisbon Law School, she was elected with 186 votes out of a total of 229 Representative votes.

In 1989, Esteves was the first woman judge appointed to Portugal’s Constitutional Court where she served until 1998. In 2004, she was elected a deputy to the European Parliament.

The number of women in the Portuguese Parliament is above the global average, higher than the majority of developed G8 countries, an international study has revealed. This current legislature has a total of 62 women out of 230 members.

The study, “Women in Politics 2010,” published by the Inter-parliamentary Union and Division for the Promotion of Women in the United Nations, showed that Portugal’s Parliament, before the June 5 elections, was made up of 27.4 percent women, significantly higher than the 18.8 percent world average, surpassed only by Nordic countries, where women represent up to 42.1 percent of parliamentary politicians.

Regarding Ministries, Portugal had 31.3 percent of Ministers who were female, being ahead of countries such as Japan (where 11.8 percent of its Ministries are headed by a woman), Russia (16.7 percent), Italy (21.7 percent), the UK (22.6 percent), France (26.3 percent) and Canada (29.7 percent); Portugal is however behind the USA and Germany, whose governments both have 33.3 percent of female Ministers.

Saudi Arabia was the only nation in the world to not have one single woman in Parliament or in the Government.

Maria de Lourdes Pintassilgo (PS), an industrial chemistry engineer, was appointed in 1979 the first woman Prime Minister of Portugal. She ran unsuccessfully for President in 1986. The following year, she was elected to the European Parliament as a member of the Socialist Party, a post she held until 1989.