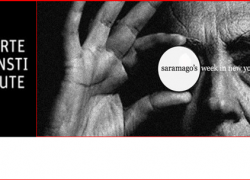 The Arte Institute, in collaboration with Lisbon based José Saramago Foundation, will promote a week of events in New York City, from October 25 to November 1st, to honor and celebrate the 90th birthday of novelist José Saramago, the 1998 Portuguese Nobel Prize Laureate.

The calendar of events includes a screening of the documentary “José & Pilar” directed by Miguel Gonçalves Mendes. The documentary portraits the life of José Saramago and Pilar del Rio, his lifelong companion.

The film is a co-production of director Fernando Meirelles, the Pedro Almodovar´s production company, El Deseo, and Jump Cut. The documentary represented Portugal at the 2012 Oscars in Hollywood, competing for the Best Foreign Film nomination. The screening is scheduled for October 25, at 8:30pm, at the Angelika Film Center.

On October 27, a screening of Iberian Short films (Portuguese and Spanish) will take place at 9.45pm, at the Anthology Film Archives.

On October 29, a lecture by Pilar del Rio and Jorge Vaz de Carvalho, titled “The Characters Meet The Author,” will take place at 6:30pm, at Instituto Cervantes, followed by a screening of videos from the Opera Blimunda based on Saramago’s book Memorial do Convento.

On October 30, Pilar del Rio, Jorge Vaz Carvalho and guest actresses will conduct a reading titled “Women in Saramago” inspired on Saramago’s work. The event will take place at 6:30pm, at the Poets House, followed by a  Photography Exhibition, titled “Saramago,” by João Francisco Vilhena, a Jazz Concert and a reception.

José Saramago (1922-2010) was born in the Ribajeto region, mainland Portugal, to a family of farm laborers. He achieved international recognition with his fourth novel Memorial do Convento after it appeared in 1988, in translation, as Baltasar and Blimunda, by Giovanni Pontiero. The Nobel committee praised his “parables sustained by imagination, compassion and irony,” and his “modern skepticism” about official truths.José Saramago wrote 29 books. His last three books, Small Memories, The Elephant’s Journey and Caim were published posthumously. More than 2 million of his books were sold in Portugal alone and many more worldwide where his work has been translated in 25 languages. A member of the Portuguese Communist Party, Saramago was also an atheist and self-described pessimist. At the time of his death, Saramago and his Spanish wife Pilar del Rio, a journalist and translator, lived on Lanzarote island, in the Spanish Canaries.

For  tickets and information >>