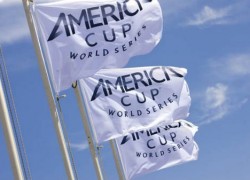 The event is expected to attract 60 million television viewers. According to the Mayor of Cascais, Carlos Carreiras, half a million euros were invested to bring estimated returns of five million.

For regatta director and chief executive of America’s Cup Management, Iain Murray, the competition will feature a number of innovations aimed at making the sport a more exciting spectacle for television audiences and shore-based fans.

The race will feature wing sail AC45 catamarans measuring 72 feet overall, at speeds of up to 30 mph. A record of 15 teams, from 12 countries is expected to compete in the international World Series underway.

For event two, the ACWS moves to Plymouth, England, scheduled for September 10-18. Event three of the cup series final will take place in San Diego, California — mid-October and early December — dates to be confirmed.

August 10-12: Both fleet and match racing

The 34th America’s Cup will be sailed in 2013 in San Francisco, California with 72-footwing-sail catamarans.

Cascais, the venue for the first event of the ACWS, is located about 30 kilometers west of the Portuguese capital of Lisbon. It has hosted many world championship sailing events in the past, including numerous World and European yachting championships, such as the ISAF worlds in 2007.