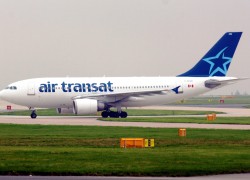 Starting April 30, Air Transat is scheduled to resume direct flights between Montreal and Toronto, in Canada, to Lisbon, Porto, and Faro, in mainland Portugal, and Ponta Delgada and Lajes in the Azores.

According to Giles Martin, Air Transat representative in Canada, the new schedule will stay in place until late October and will offer a total of 21,500 seats, twice the amount of seats made available last year.  A round trip in May will average CAD$1,100 and CAD$1,125 from June to October.

Artur Sousa, Air Transat representative in Lisbon, highlighted some of the company costumer service perks which will include “classic” two classes, 110 lbs of luggage, meals, 82 inches between seats (94 inches in executive) and in-flight entertainment, among other extras.

Air Transat is an airline based in Saint-Laurent, Montreal, Quebec, Canada, operating scheduled and charter flights, serving 60 destinations in 25 countries.