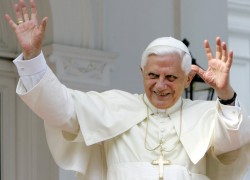 Eduardo Paes, Mayor of Rio de Janeiro, Brazil, announced Monday that Pope Benedict XVI will visit the city, in 2013, at the occasion of the World Youth Day (Jornada Mundial da Juventude) sponsored by the Catholic Church.

In a statement to the press, Pares said the city is ready to host the Pope. “We will make it official in middle August,” he announced.

More than 600 thousand people are expected to participate at the event followed by many more thousands around the world.

Yet, the Vatican has not announced any plans for a papal trip to Brazil. And although it has been widely rumored that the next international WYD celebration (after this month’s gathering in Madrid) will be held in Brazil, those rumors are unconfirmed.

Pope Benedict XVI visited Brazil for 5 days in May 2007, where he opened the 5th General Conference of the Episcopate of Latin America and the Caribbean.

Brazil, the largest Portuguese-speaking country in the world, is also the largest Catholic country with an estimated 145 million Catholics, representing 75 % out of a total population of nearly 185 million.

Rio de Janeiro (6,3 million) is the capital city of the State of Rio de Janeiro, the second largest city of Brazil, the 6th largest in the Americas, and 26th in the world.

Currently there are 427 bishops and 18,087 priests in Brazil where the Church runs 366 hospitals, 1,013 clinics, 764 homes for the elderly or disabled, 1,942 orphanages and nurseries, 2,159 family counseling centers and other pro-life centers, and 2,830 centers for education and social rehabilitation.

World Youth Day (WYD) was initiated by Pope John Paul II in 1985. It is celebrated at the diocesan level annually, and at a week-long international level every two to three years at different locations. The international level events attract hundreds of thousands of youth from almost every country on the planet. It is a major part of the upsurge in Catholic Youth Work in some countries over recent year.