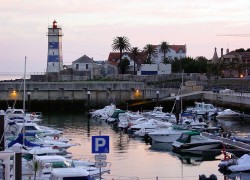 The America’s Cup World Series (ACWS) regatta will begin in Cascais, Portugal, August 6-14.  A record of 15 teams, from 12 countries will be competing. The race  will feature wing sail AC45 catamarans measuring 72 feet overall.

For event 2 the ACWS moves to Plymouth, England, scheduled for September 10-18.

The cup finals will take place in San Diego, California — mid-October and early December — dates to be confirmed.

The 34th America’s Cup will be sailed in 2013 in San Francisco, California with 72-foot wing-sail catamarans.

Cascais, the venue for the first event of the ACWS,  is located about 30 kilometers west of the Portuguese capital of Lisbon. It has hosted many world championship sailing events in the past, including numerous World and European yachting championships, such as the ISAF worlds in 2007.