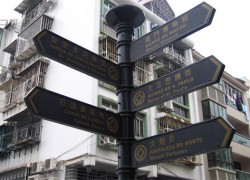 Writers from Greater China and the Portuguese-speaking world will participate in the 1st “The Script Road” [Rota das Letras] Literary Festival to be held in Macau from January 29 to February 4, 2012.

Jointly organized by Macau-based Ponto Final newspaper and the local Portuguese Society of Arts and Letters (SAL), in partnership with the Instituto Português do Oriente (IPOR), the event will coincide with the 20th anniversary of the Portuguese-language daily Ponto Final.  According to Ponto Final, the organizers expect the event will attract an estimated  four thousand people.

The goal is to provide Chinese and Portuguese-speaking writers with a platform to exchange views. The festival will include debates, workshops, a book fair and a tribute to Macanese writer Henrique de Senna Fernandes, who passed away last year. A concert is also planned, with musicians from Portugal, Brazil, China and Macau.

In addition, the visiting writers will be invited to write short stories about Macau that will later be published into a bilingual edition to be launched at the 2nd “Road of Letters” Literary Festival to be held in 2013.