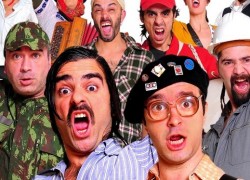 The Portuguese grass-roots musical troupe “Os Homens da Luta” — The Men of the Struggle — are competing tonight (Tuesday) as finalists with 19 others countries for the semi-final 2011 Eurovision Song Contest, in Dusseldorf, Germany.

The troupe won the Eurovison nomination in Portugal in March with their song  ” A Luta é Alegria” — The Struggle is Joy.

“Os Homens da Luta” did not qualify tonight for the Final Round of the 2011 Eurovision Song Contest,taking place Saturday May 14, in Dusseldorf, Germany.

Out of the 19 countries that were represented in the First Semi-Final, the following qualified for the Final: