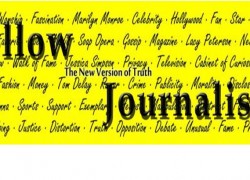 The recent flurry of fictitious reports about the Madeleine McCann case is another example of how far quality journalism has been replaced by the latest form of ‘churnalism.’

A story is concocted by a reporter and published on the website of a major newspaper or TV network. Within hours, it has been copied, rewritten or translated without anyone bothering to check for accuracy. If it is sensational enough, the story is then regurgitated around the world.

The media have long been able to share important information from established news agencies and other reliable sources. The rot set in with the upsurge some years ago of propaganda and slanted press releases put out by PR people. The Internet has dramatically speeded and simplified shoddy, second-hand reporting.

Churnalism has now reached unprecedented levels with media organizations shamelessly copying one another online. As a result, a profusion of misinformation is spewed out daily.

Last week’s excitement over the Madeleine McCann case was based on the fact that four Scotland Yard detectives flew to the Algarve to meet with Polícia Judiciária counterparts. The visit followed a letter of request sent by the British Crown Prosecution Service to the Portuguese equivalent.

Officials in both countries refused to comment on the contents of the letter or the reason for the visit. This did not stop the British tabloids from improvising. They spoke of “a dramatic breakthrough” and claimed that the arrest of three burglars was “imminent.”

Kate and Gerry McCann were said to be “on tenterhooks” and being “kept fully informed” about the latest developments. 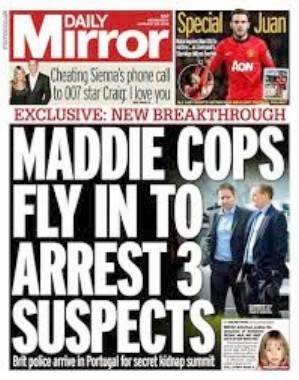 These “exclusive” assertions in the Daily Mirror were picked up and used not only by competing tabloids, but by quality papers such as The Guardian and the Daily Telegraph.

Portuguese papers did not jump on the bandwagon, but the revelation of a ‘breakthrough’ spun around the world and found its way into the Sydney Morning Herald, the Times of India, the Huffington Post and the Daily Beast to name but a few online services.

The Epoch Times, which prides itself on being published in 21 languages in 35 countries across five continents, was running the same “imminent arrest” yarn on the same day ITV mercifully set the record straight with the headline: “No imminent plans to make any arrests in Madeleine McCann case.”

ITV described the meeting between British and Portuguese detectives as “a routine part of the investigation to establish what happened to Madeleine McCann.”

By then the media damage had been done. As the Sunday Mirror columnist Carole Malone put it: “How devastating this must all be for Kate and Gerry McCann – another flurry of headlines, more promises of suspects and arrests… and then nothing. Again!”

The copy and paste style of churnalism practiced nowadays is akin to plagiarism, but who cares? For example, a retired British police superintendent with a keen interest in the McCann case spotted that several paragraphs in a Daily Mirror story on 28 December had been copied almost word-for-word, without quoting or crediting the source, from a story that had appeared in the Daily Mail on 15 October. He brought this to the attention of both papers and the Press Complaints Commission. They expressed little interest.

Journalistic analysts put the growth in churnalism down to a combination of things, including increased competition, reduced revenues and inadequate staff with insufficient time to verify and properly develop stories.

It is likely to get ever more frantic. We have already moved on from last week’s “imminent arrests” to this week’s tabloid revelation that “detectives are probing a Portuguese gypsy site just 15 minutes away from where Madeleine was snatched.”

Well, maybe, but for starters the place the foreign media are talking about is not a gypsy site at all.

One thing is certain though: the media will continue to churn out this sort of rubbish as long as there are people who want to read it.