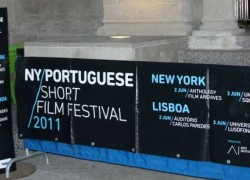 By Carolina Matos, Editor —  According to Ana Miranda, creator and organizer of the 1st New York Portuguese Short Film Festival, the event was “a tremendous success.”

Held on June 2 and 3, the Festival was organized by the Arte Institute, based in New York City. The two-day event, hosted by the Anthology Film Archives and New York City Department of Parks & Recreation, featured 20 short films produced by emerging Portuguese film directors.

This was the first time a film festival featuring works by Portuguese film directors took place in both New York and Lisbon simultaneously. The festival was broadcast on real time, live stream on the Internet.

Ana Miranda, a Portuguese actress, producer and jorunalist, told de Portuguese American Journal, “It was a sold out event in New York on both days, at the Anthology Film Archives as well as the Union Square Park. We also sold out the Auditório Carlos Paredes in Lisbon.”

It didn’t come as a big surprise to her that the event was so successful. She said, “I was able to demonstrate that there was a real need for Portuguese cinema [in New York] and that there is a cultural space for it.”

Ana Miranda was very pleased that the event offered a fresh perspective of today’s Portugal to both audiences. She said, “I truly believe that we were able to offer a positive and diverse image of the country, its people and culture as well as its unique landscape.”

For Ana Miranda the goal of bringing a closer attention to the Portuguese emerging cinema was fully achieved.  She said, “We were able to promote not only the film directors and their movies, but we also opened the door for similar events in the future.”

Another important goal was to bring together people from the industry to join the Festival and give their feedback. She said, “It was throughout very positive. I am convinced that soon we will recognize the positive impact of this initiative for some of the directors and their movies.”

American actress and singer, Margret Avery, who attended the event, told the Portuguese American Journal, “Ana Miranda’s passion as a film maker carried over into the creation of the first ever Portuguese Short Film Festival with bright new talents for us all to take in. I felt moved to tears and laughed while also feeling just completely entertained, and that is what film is all about. Bravo!”

For Nuno Alves, a representative from Turismo de Portugal, the Festival was “a great surprise.” He said, “Not only the 20 short films featured introduced us to a new generation of Portuguese film directors, but the acceptance by the public of New York was tremendous. What this means is that there’s a genuine interest for Portugal here and that we should seize every opportunity to promote our country.”

Praising the work of the organizers, he added, “It is with pleasure that I see more individuals taking the initiative to showcase Portugal. This shows us the strength the Portuguese community has in the US and its relevance for our own promotional activities here. The Arte Institute is for sure one of them.”

Overall, the Festival was a positive experience for all concerned — organizers and participants. The second edition of the Festival is already being g planned for next year. In the meantime the Arte Institute will announce the “Summer Series” with more screenings.

She would also like to express her appreciation to the hostesses and host, Benedita Pereira, Rita Matos and Pedro Fernandes and also Noiserv who performed at Auditório Carlos Paredes in Lisbon.

A special “Thank You” goes to the band “The Gift” that will perform on June 14th at the Bowery Ballroom, officially concluding the 1st Edition the  New York Portuguese Short Film Festival.

Ana Miranda is also very thankful for the support she received from the New York Parks and Recreation, namely from Richard Sedlisky, Brian Egan, Rebecca Fergusson and Danny.