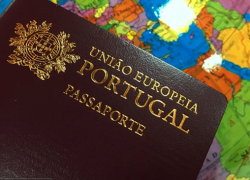 What is your experience of Portuguese immigration? What are the stories, dreams, and impressions that define your sense of Portuguese identity? Why not share them? Na Ponta da Língua/On The Tip of The Tongue is waiting to hear from you. It is the virtual platform and hands-on biographical research project initiated in 2014 by social scientist and Portuguese migrations specialist Elsa Lechner. With funding in 2017 by the Gulbenkian Foundation program on Portuguese Language and Culture, Lechner and her multidisciplinary group of 6 colleagues from France, Brazil, the United States, and Portugal launched the project’s virtual platform last September.

Na Ponta da Língua offers an interactive, digital platform focusing on life narratives produced by Portuguese students in Brazil, France, and the United States as well as by Portuguese people living and working outside Portugal. The goal is to cultivate interconnectivity and deepen knowledge about Portuguese emigration among different Portuguese communities abroad and in Portugal by looking at personal testimonies, family memories, and biographical accounts of participants. Anyone who wishes to consult or contribute to the digital archive ready to collect such experiences is welcomed to do so.

Elsa Lechner’s calling card identifies her as a researcher at the Center for Social Studies at the University of Coimbra in Portugal where she began working as an assistant in 2009 before becoming a principal researcher in 2014, following doctoral studies in France. She received a prestigious Fulbright scholarship in 2013 to study the Portuguese community in Newark, New Jersey. Her work is multi-faceted and innovative.

“Providing visibility to buried biographies…a new look at Portuguese immigration narratives” is her self-description that includes such activities as facilitating community workshops, consulting, graduate-level master classes, and academic publication. She is deeply influenced by the groundbreaking work a century ago of William Thomas, the American social scientist.

“To understand the experiences of real people,” says Lechner, “we need to take into account their narratives and lived experiences.” Biographical research is her primary tool as she explores social and digital memory as well as the digital humanities to know the real immigration experiences of many different people.

Tell Me A Story…

“We are all narrative beings and narratives allow us to situate ourselves in the chaos,” says Lechner. “Nearly everyone wants to tell their story. It’s a way for us to become comfortable with ourselves.” The image of Portuguese immigration is often portrayed with the clichés and prejudices that have historically accompanied new comers from many countries. “They are caricatures with some sociological truth.” Lechner’s work is deeper and more personal as she aims at revealing narratives that often surprise the people who tell them. She does so, fully-voiced and not just on the tip of the tongue…

“The key is respecting differences and providing a comfortable place where stories can emerge from memory and even unconscious thoughts.” Lechner tells of the example of her colleague’s enactment exercises with Portuguese students in Paris who improvise the role of the Portuguese plumber who arrives for a repair job at a Parisian apartment.

“By enacting the situation, participants discover their own references that connect them to concrete images of their identity with regards to Portugal. Stuff comes out.” A personal narrative of identity emerges and people discover ways of belonging that don’t necessarily have to do with what Lechner calls “artificial images of a public identity without real personal investment,” such as Fado music or the glory of Portugal’s navigation history.

“It is about getting in touch with their own resources, a relief from the burden of the past, a possibility of creation and new empowerment. There is no need for a flag or an icon. You can find something within that allows you to connect.” The autobiographical method allows for participation without obstacles with regards to language, a non-judgmental place for expression where all differences and languages are accepted.

“The project is not looking for the flag of a fixed identity,” Lechner insists. “It is about getting people in touch with the multiple versions of themselves where being Portuguese is important and that is rarely acknowledged. It is about how people understand the ancestry, language, and culture of the country in their own way.”

Indeed, the discoveries are immediate and personal. Lechner’s work engages with the digital age, using new communication technologies as a key to exploring immigration narratives, allowing more people to connect and share that information, more visibility to diversity, and a familiarity with diversity that didn’t exist before. Fluid and flexible images of identity are the ideal in developing autobiographical immigration work. This is a novelty in the history of Portuguese immigration studies.

Elsa Lechner is not only concerned with Portuguese emigration. World demographics are in flux as a result of political and religious conflicts, desertification, economic instability, and other factors, causing human migrations in unprecedented numbers. “Democracies are currently in transition,” she observes. “The problem is far-reaching and the current global refugees crisis impacts attitudes towards immigrants in democratic countries.” To call attention to a problem that resonates throughout Europe and North America, Lechner has coined the phrase “Migrant Lives Matter,” inspired from the recent “Black Lives Matter” movement. It underlines her public stance before the contradictions dominating migration policies worldwide. “Late capitalism doesn’t value personal, individual rights,” she argues, noting the ignorance of human rights within democratic countries and the banalization and necropolitics of migration.

In a recent publication, Else Lechner advocates biographical research as “a relational type of work that creates opportunities for researchers and participants to engage in an empathic endeavor, a dialogue that has the potential to change the subjectivities of their different, sometimes asymmetric, subject positions.”

Although Na Ponta da Língua is rooted in exploring narratives of Portuguese immigration, everyone can connect to the project, says Elsa Lechner. “The issues exist wherever you find Portuguese immigrants and immigrants in general, for example, Turkish people in Germany, Syrians in Sweden or Canada.”

On The Tip of The Tongue speaks beyond words and language. It embraces the full embodiment of immigrant narratives in all their creative potential and in doing so stakes a claim for the intelligent, peaceful, and humane integration of migrant populations. Next July 23 and 24th, near the end of its one-year plan and with hopes of continuing the project in the future, Lechner and her Na Ponta da Língua colleagues will organize a conference in Lisbon at the Gulbenkian Foundation with an open call for papers followed by the publication of a book documenting the project’s first phase.