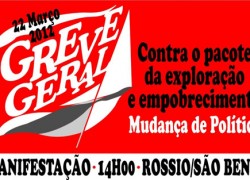 The leader of the General Confederation of the Portuguese Workers (CGTP), the Portuguese largest trade union confederation, said Monday the organization intents to go ahead with the general 24-hour strike scheduled for Thursday, March 22.

Under the labor reforms, employers will be able to hire and fire more easily and workers will receive lower severance pay. The measures also include higher taxes and cutting civil servants’ holidays and bonuses.

The strike is expected to disrupt transport and other public services, including schools and hospitals, throughout the nation. Some international flights may be cancelled or delayed.

He stated, “We are faced with the problem they created and it is the government who sets the political agenda and has now decided to review the labor legislation in effect for both the public and the private sector.”

For the CGTP unionist the strike was called in defense of workers’ rights and will “become a strike for all workers irrespective of their union membership.”

“Workers are getting brutally poorer day-by-day, this is a general strike about the rights of workers and the younger generations,” he added.

Thursday’s strike will be the second general strike in recent months. Union leaders said this will be the biggest strike Portugal has ever seen.

On November 24, CGTP and UGT joined efforts to stage a general mega-strike, one the biggest in Portugal’s history, with hundreds of thousands of workers taking part in the action.

Strikers will protest against the government’s austerity measures following Portugal’s request for a 78 billion-euro ($104 USD billion) under a financial rescue program agreed last May with the European Union and the International Monetary Fund. Portugal was the third Eurozone country, after Greece and the Irish Republic, to receive a bailout.

During the final quarter of 2011 unemployment in the country hit a new record of 14 percent. The Portuguese economy shrank by 1.5 percent in 2011.