Law restricts parents from naming their children as they please – Portugal 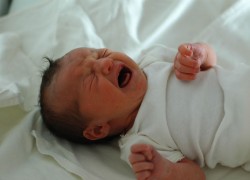 Portugal is one of the few countries in the western world where parents are not free to name their children as they please.  Indeed if you were born in Portugal and your name is not “Ovinis” or “Dobela” thank the Portuguese czar overseeing name giving.

Apparently the reason for the strict naming law is to abide by tradition while protecting the child from abuse.  The Portuguese law considers that naming a child isn’t a right but rather a responsibility and children are entitled to the protection of the law even when considering name giving.

As a rule, Portuguese parents will choose traditional names, but if in doubt, before naming a child they need to consult the 80-page long list of approved and rejected names at the Instituto dos Registos e do Notariado. The list tells which names parents can or cannot name their children. There are 2,600 names on the reject list.

As far as tradition, the law favors names that are traditionally Portuguese.  There are exceptions for foreigners who are allowed to name their children with foreign names, but in Portuguese translation and according to the Portuguese orthography. Therefore, “Thomas” would become “Tomás” and “Philip” would be “Filipe.”

Naming a child with a nickname or diminutive is also not allowed.  For instance, a child could be named “Joana” but not “Joaninha”, or “Rita” but not “Ritinha.”  Another rule is that names must be gender explicit.  No gender neutral names are allowed.

A recent survey revealed that the most popular names for boys in Portugal were João, Rodrigo, Martim, Diogo, Tiago, and Tomás — while for girls the favorite names were Maria, Beatriz, Ana, Leonor, Mariana, and Matilde.