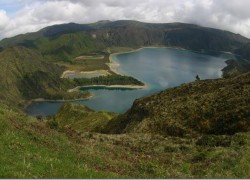 Experts in the Azores have alerted the population of São Miguel Island for seismic activity which they considered to be above normal. The seismic events where located in the system of Fogo and Congro lakes, the central region of the island.

“The situation is ongoing and the number of microseisms is slightly above reference values” said Wednesday João Luís Gaspar from the Center of Volcanology and Geological Risk Assessment (CVARG) of the University of the Azores.

He also said that the seismic activity was the result of “very low magnitude earthquakes” adding that “none of which have been felt by the population.”

Declining to comment on what the evolution of the crisis could be João Luís Gaspar recalled that “seismological activity is difficult to predict,” but that the possibility could not be eliminated of an earthquake occurrence which may be felt by the population. He said, “It does not mean it will happen; only that one cannot eliminate that possibility.”

According to the CVARG website, the Fogo-Congro system is one of the most critical seismologic areas of the archipelago where accumulated tensions exist resulting from the lithospheric interplay of the Eurasian, African and American plates.

The Azores are sitting on the so called “Azores triple junction” area where the North American, Eurasian and African plates meet. This area is responsible for frequent geological and volcanic activity on the islands. Periodic volcanic eruptions and earthquake events, with occasional tidal waves, can have devastating effects on the Azorean islands.