A Thousand and One Nights in Lisbon – By André Darlington 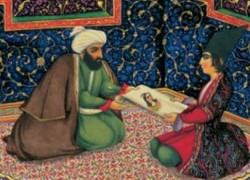 When Candide and Pangloss arrive in Lisbon, the two just narrowly survive a shipwreck in the harbor. Then the city is promptly destroyed by an earthquake. During the mayhem Candide is injured, but instead of rushing to help him, Pangloss considers the finer points of their situation. Such is the vicious humor of Voltaire’s satire.

In 1755 the Earthquake of Lisbon, and the tsunami that followed, leveled the majority of the city and killed an estimated 60,000 people. The quake occurred during mass on All Saints Day, and church candles toppled by the vibrations set the city ablaze. To escape the inferno and collapsing buildings, many of Lisbon’s denizens fled down to the water and into boats, only to be engulfed by a twenty-foot ocean swell.

The event was a seminal moment in European history. At the time, the prevailing Enlightenment ideas were those of philosopher Gottfried Leibniz, whose attempts to reconcile reason with theology had famously led him to posit that “all is best in the best of all possible worlds.”

But in the face of the catastrophe in Lisbon, Voltaire was disillusioned. He wrote a poem entitled Poem on the Lisbon Disaster, or: An Examination of that Axiom ‘All is Well.’ In it, he wondered aloud how such a horror could be the act of a free and good God. 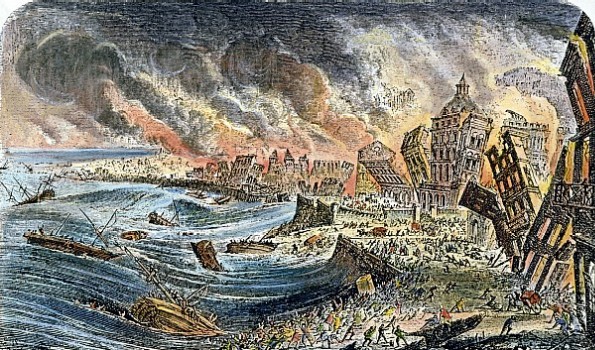 Lisbon earthquake and tsunami of 1755.

Voltaire’s portrayal of miserable humanity in his poem rankled Jean-Jacques Rousseau, who responded with a nasty letter a few months later. Rousseau complained that Leibniz’s philosophy gave comfort, whereas the wealthy Voltaire couldn’t possibly sympathize with the common people’s need for hope in the face of life’s miseries.

The characters in Candide endure countless miseries—drowning, torture, rape, unrequited love, disease, eviction, slavery and the Inquisition. Voltaire’s narrative is a compounding series of misfortunes that multiply and branch out, with the recipients of abuse always bouncing back for more. Members of the book’s cast are killed off early on, and simply reappear with more stories of woe later. There is such a dizzying accumulation of misfortune that Italo Calvino suggests that it is Candide’s lightness, its velocity and vitality, that still captivates us today.

That Voltaire’s breezy, forever proliferating narrative passes through Lisbon is not accidental. Lisbon is, and has been for centuries, a city through which stories pulse. This westernmost capital in Europe, and jumping-off point for the exploration of the world, has been influenced and stimulated by the Phoenicians, the Visigoths, the Romans and the Moors. During the Age of Exploration, every ship departure was a message in a bottle, every return the importer of exotic tales. 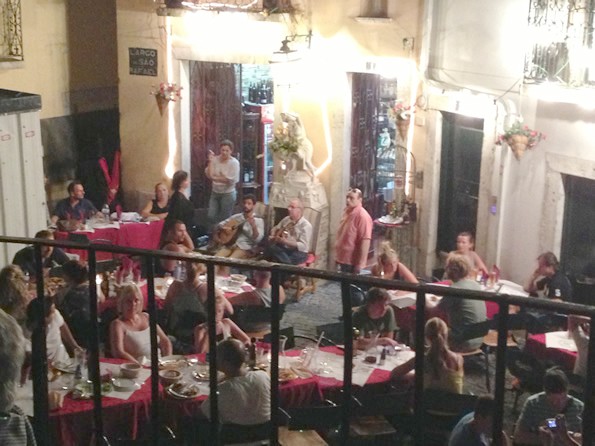 Stumbling on Fado outside a tavern late at night.

By full moonlight Lisbon’s labyrinthine cobbled ivory streets gleam like empty, tusk-tiled swimming pools. Ghostly figures appear along corridors and then quickly disappear as though they are characters from aborted film scenes. The intriguing, dream-like nooks and crannies create at once concentration and profusion.

It is into this world that the great Portuguese writer and flaneur, Fernando Pessoa, arrived from South Africa in 1905. Here he falls in love with the strangers he encounters on the streets, in love with the fragments of stories that occur around every bend and on every staircase. The fragment, a deplored feature of modernity for so many, becomes for Pessoa something he cultivates.

The author himself fragmented and multiple, he composes his writings under seventy-two different pen names. His passion for self-accretion and division was so great he even ghost-wrote a break-up letter to a lover. These multitudes inside Pessoa created a multiple work, The Book of Disquiet, which fittingly has no definitive edition. Assembled from pages found posthumously in a trunk, it opens out onto yet more pages, with at least four distinct translated versions in English alone.

Baudelaire could have been talking about Pessoa when he calls such a man a ‘kaleidoscope equipped with consciousness.” One thinks of Edgar Allen Poe’s The Man of the Crowd, and in fact, Pessoa translated Poe– as well as O. Henry and Walt Whitman– into Portuguese.

In Poe’s short story, the narrator becomes obsessed with an old man he sees while sitting at a café, and proceeds to follow him through the streets of London, doggedly, overnight until the next day. It is a story of pursuing uniqueness within a teeming and anonymous modern city. But it is also the start of a Chinese box, or a Russian doll: the narrator of Poe’s story is, in effect, pursuing another story.

In The Thousand and One Nights, the Persian sultan Shahyrar is so disillusioned with the infidelity of women that he marries a virgin every day and then executes her in the morning. But when he marries Scheherazade, the Grand Vizier’s daughter, she begins to tell a story every night so suspenseful that the Sultan desires to hear its completion. Each night she begins a new story after telling the old one, such that every story always leads to yet more stories, with stories emerging from within one another, ad infinitum.

The collection that became The Thousand and One Nights was drawn together over centuries from multiple Asian and Middle Eastern sources. The book’s impact on European letters after it was first published in France in 1704 has been enormous. It was particularly pivotal for Marcel Proust, for instance, who mentions it as inspiration for the multiple intersecting stories found in his sprawling work, A Remembrance of Things Past.

But the book was also foundational for the Argentinian writer of accumulating and intertwining stories, Jorge Luis Borges. Borges is a master of multiplication, of stories in which unreality threatens reality through a sheer blizzard of narratives–so many interlocking that the reader experiences vertigo. 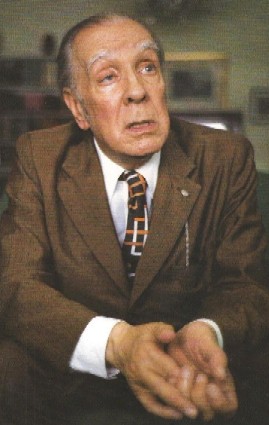 With a Portuguese great-grandfather on his paternal side, Borges played the part of a flaneur as a youth on the streets of the Italian-Portuguese neighborhoods in Buenos Aires. Characters often speak Portuguese in his stories, and he has been honored with a monolith by Federico Brook in the Arco do Cego garden in Lisbon.

In 1977 the blind author, who committed entire passages of the world’s literature to memory, discussed The Thousand and One Nights in a lecture he delivered at the Teatro Coliseo. In it, he recalls a note by the Orientalist Baron von Hammer-Purstall describing the confabulatores nocturne, men paid to tell stories during the night. He relates that as late as 1850, such storytellers were still common in Cairo. It was professional storytellers such as these that gathered the folktales and fables found in The Thousand and One Nights, and embellished them over the ages.

Curiously, it was in the district of Alfama in Lisbon where Fado first appeared as a full-fledged art form sometime in the 1820 and 30s. Although its origins are a mystery, Fado is thought to have begun in this port area as a night dance among the laborers and sailors. It has Moorish roots, and Alfama was once the Moorish quarter. The name Alfama comes from the Arabic Al-hamma, meaning fountains, or baths.

Fado singers are Lisbon’s confabulatores nocturne, singing songs of fate, of longing, of what the Portuguese call saudade—the emotional result of irrecoverable loss.

Pessoa and Borges never met, although they were both in Lisbon at the same time twice during their lives. Once, in 1914 when Borges’s family was passing through on their way to Geneva. Borges was fourteen and Pessoa would have been twenty-six.

It is difficult to accept that they did not meet the second time, in 1923, when Borges spent forty-five days in Lisbon and both men were by then authors and Anglophiles with many similarities. There is even reason to believe that Borges drank coffee at Pessoa’s café, A Brasileira, which still exists.

But they did not meet, nor did they ever write.

After Lisbon, Voltaire’s picaresque tale continues on to the New World, to Borges’ home of Buenos Aires, and then returns from across the Atlantic to England, to come to rest finally on the Ottoman coast. There, Candide receives the words of wisdom from an old Turk that free him from Leibniz’s optimism. He has the epiphany that rather than philosophize, ‘we must cultivate our garden.”

With that pronouncement, Voltaire’s little book marked the end of a world of transcendental good and evil, and the birth of a far more earthly and practical one. The disillusionment found in Candide signaled a profound shift in ethics and epistemology, making way for the storming of the Bastille thirty years later.

And that is how, for we moderns, the story of the earthquake in Lisbon, the city of stories, is, like a tale told by Scheherazade, the beginning of our own.