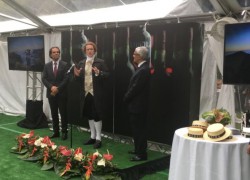 Ambassador of Portugal Domingos Fezas Vital, and his wife, joined the President of the Regional Government of Madeira, Miguel Albuquerque, on June 22, to welcome a large gathering of about 350 guests at his official residence in Washington DC.

The “Toast to America” event celebrated at the Portuguese Embassy replicated one of the defining moments of the signing ceremony of the Declaration of Independence in 1776. Ambassador Vital, who set this new tradition, informed the guests that the Founding Fathers raised a glass of Madeira wine for a joyful commemoration of the institution of the United States of America. His remarks brought both joys and laughter to all those who came to celebrate the freedom in America as well as friendship with Portugal.

In his welcoming remarks, Ambassador Vital remembered the victims of the wildfires in Portugal and thanked everyone who expressed their support and solidarity with Portugal.With substance and style, Ambassador Vital and President Miguel Albuquerque entertained the friends of Portugal.

Soon after their brief remarks, the star of the show a reincarnated “President Thomas Jefferson” descended down the steps into to address the crowd. “President Jefferson” spoke eloquently about his favorite beverage – Madeira wine. 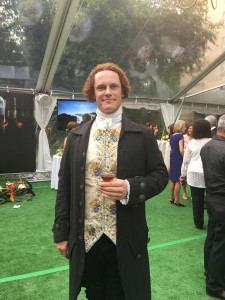 Jefferson went on talking about José Correia da Serra (1750-1823) who was a Portuguese naturalist and a close friend. In fact, the friendship was so special that its memory lives on in the historical Monticello mansion in Charlottesville, Virginia. In fact, the memory of this legendary Portuguese friend of President Jefferson is detailed on the website dedicated to him.

While reliving the birth of the United States and celebrating US independence, the event provided an excellent opportunity for learning. For the wine lovers, a brochure “Madeira Wine – a Taste of History” made a connection in many creative ways.

For instance, page 18 with a caption “Maderia, the Wine of America” showcases a bottle labeled “Madeira,” following by the statement: “the history of Madeira Wine would be deeply impoverished if we did not recount the fascinating ties between this wine and the United States!… ties would over decades, lead to the growth of a mutual influence on the habits, customs and the tastes of the American population; while the United States shaped the flavors of Madeira wine, Madeira wine also introduced habits and customs to American Society!”

“Madeira Pairings” by Chef David Santos, Louro Restaurant, New York City, provided the readers with colorful pictures of different wine pairings as well as enticing recipes such as “roasted fig salad with citrus and fennel” and the “braised rabbit with carrot and pea risotto.” In presenting his ideas, Chef Santos described the geography, the wine-making culture, the vine varieties and gastronomy.

Since Madeira is not just about wine, representatives of the Azure Airlines and TAP  (Portugal national carrier)  were ready and eager to engage interested travelers and explorers for a memorable journey to Madeira and any other parts of Portugal.

The May 2017 TAP magazine on hand, with the lead story “The Paths to Fatima” and pictures, invites visitors to make the journey and a pilgrimage to Portugal. The stories and the photographs of families of diverse origins convey the image of Portugal as a welcoming and tolerant society.

Winners of the raffle ticket drawings received a beautiful Madeira Embroidery, a bottle of 1952 vintage Madeira wine and a ticket for two to travel to Portugal.

Through this event, the guests also learned about the “Madeira Party” which has a historical connection to the legendary “Boston Tea Party.” As history buff might remember, in 1768, John Hancock, one of the signatories of the Declaration of Independence, refused to pay the new tariffs imposed by the British Crown. This act of defiance led to the seizure of his 127 casks of Madeira Wine which led to a riot. It was part of the series of events that led to the famous “Boston Tea Party” which culminated in the independence of United States and hence the celebration graciously hosted by Ambassador and Mrs Vital in Washington.