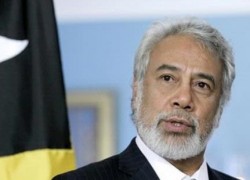 Kay Rala Xanana Gusmão, Prime-Minister of the Democratic Republic of East Timor (Timor-Leste) and its former President, was awarded an honorary Doutor Honoris Causa degree from the University of Coimbra on Wednesday.

Coimbra University Professor, José Augusto Cardoso Bernardes, highlighted the reasons for the honor, which include Gusmão’s role in ensuring that Portuguese became an official language of East Timor, his contribution towards the struggle for East Timor independence from Indonesia, his political role in rebuilding the country, as well as his affective bond with Portugal.

Bernardes also recalled that throughout the long years of Timorese resistance to Indonesian invasion, the now Prime Minister wrote and published poetry in Portuguese.

Portugal would do well to invest in East Timor, particularly in the oil, tourism and business areas, the country’s Prime Minister Xanana Gusmão said Tuesday in Lisbon.

After a meeting with the Portuguese President Aníbal Cavaco Silva, Gusmão said international investment was one of the topics they had discussed.

“I would like to invite (Portuguese) businessmen to look at the opportunities we have to offer”, Gusmão told reporters.

The East Timorese prime minister said Cavaco Silva had offered “supportive words … on the changes in East Timor in terms of security and political stability.”

Asked to describe the meeting, Xanana said it was “a meeting between friends, as always.”

Kay Rala Xanana Gusmão was born on June 20, 1946 in Manatuto, Timor-Leste (East Timor). After leading a 28 yearlong resistance movement against the Indonesia occupation, he won independence for East Timor in 1999.