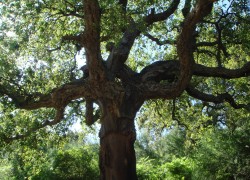 The Portuguese “sobreiro”, the most emblematic tree of Portugal [Quercus Suber or Subgenus Quercus, for cork tree] was named the “National Tree of Portugal,” unanimously approved by a parliamentary resolution, sharing the honor of national symbol with the Portuguese flag and the national anthem.

The source of cork, the Portuguese “sobreiro” is estimated to be over 60 million years old. Its importance has been reflected in the Portuguese history, literature, and art.

According to the latest (2006) National Forest Inventory, the “sobreiro” occupies about 2,150,00 hectares (5.3 million acres) of Portugal’s forest, producing about 310,000 tons of cork per year, occupying 500 factories, which employ about 20,000 workers. Portuguese law prohibits stripping the trees more than once every nine years in order to protect the species.

Of great cultural, economic and environmental value, the “sobreiro” also contributes with 10% of Portugal’s exports, representing 16% of the total foreign income derived from trade, making Portugal the largest producer worldwide with 70% of the world’s cork trade.

Portuguese cork exports are directed to three main consumer markets: the United States of America, the United Kingdom and Germany, which absorb approximately 70 percent of the total production.

Large Zippered Pocket in the Back, 2 Pockets Inside

All cork bags come from Portugal and are handmade