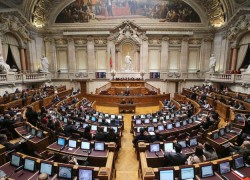 Portuguese Parliament has expanded reproductive rights to gay women by approving their access to artificial insemination.

The measure voted Friday was restricted to married heterosexual couples and couples living in domestic partnerships for over two years.

The legal changes also recognize surrogacy for women with health problems seeking pregnancy. Both measures will be effective within weeks.

The changes were welcome by gay rights groups following recent legislation allowing same-sex couples to adopt children and removing some abortion restrictions. The measures removed hospital charges for voluntary abortions through the 10th week of pregnancy and waived mandatory counselling before the procedure is carried out.

Currently in Portugal, same sex married couples have the same rights as married heterosexual couples including taxation, inheritance and housing and the right to adopt their partner’s biological or adopted children.

The Portuguese Parliament approved the right to same-sex marriages in 2010; placing Portugal is among the first 10 counties in the world to allow same-sex marriages and one of the few countries to contain a ban on discrimination based on sexual orientation in its Constitution. As recently as 1982, homosexuality was still considered a crime in Portugal.